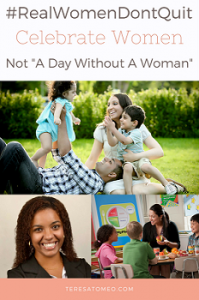 DETROIT, MI, March 7, 2017 – Conservative, pro-life women are promoting responsible womanhood with the #RealWomenDontQuit campaign to counteract the radical feminist event “A Day Without a Woman” planned for Wednesday, March 8, 2017.

Talk show host, media activist and author of Extreme Makeover – Women Transformed by Christ, Not Conformed to the Culture, Teresa Tomeo and other conservative women invite women to join a “Tweet Fest” using the hashtag #RealWomenDontQuit. They also encourage women to let their authentic femininity shine with activities that contribute to society.

Radical feminists, on the contrary, want women to protest by walking off their jobs, not spending money at male-owned businesses, and even strike from home and family responsibilities. They are protesting a number of things including Donald Trump’s presidency, economic inequality, and being “gender oppressed.”

Ironically, since 1909, March 8th has been set aside as International Women’s Day as a day to mark the contributions of women to society around the globe. “Now, according to the same group that brought us the angry ranting of Whoopi, Madonna, and Ashley Judd on the day after the Inauguration of Donald Trump, this is a day for more whining, mostly about politicians they detest and demanding the right to also walk out on their unborn babies through abortion,” says Tomeo.

“Yet, how many women can really skip work? What about mothers and nurses and women who people depend on? Why would women want to let down the people who depend on them?”

#RealWomenDontQuit is a positive response to celebrate God’s plan for women. “We are women who celebrate responsible authentic womanhood. We don’t want them to take their concerns out on their employers or their children by abandoning their responsibilities for a day,” says Tomeo. “We are not quitters. We take on more responsibility when times get tough and things don’t go our way. That’s what the strongest of women in our nation’s history have done.”

Tomeo encourages women to share their ideas; to speak up this week about true feminism. She has started a running list on her blog and encourages people to share their articles with ideas and reasons as to why this is not their event by tagging or direct messaging links to Teresa Tomeo on Facebook and Twitter and she’ll add them to her blog resource list.