Ciao! It’s been a few months since my last T’s Tea Time. I have been spending a lot of time traveling, including two trips to my beloved Italy. But I wanted to take a moment in this busy but beautiful season to wish you and yours a blessed Advent, and by sharing with you examples of people with true Christmas spirit. Both of these men are putting their faith into action and truly practicing what they preach. Isn’t that a concept that is so desperately missing in our world today that continually focuses, as we so often see in the headlines, on those only interested in me, myself, and I?

An early Christmas gift for me came during our time in Rome with the opportunity to interview, via zoom, the great vocalist, Andrea Bocelli. My dear friend and colleague, John Hale of Corporate Travel Service, and I are working on a series of videos dedicated to all things Italy travel. Through a mutual acquaintance, Anthony Rugiero of Antonio’s Restaurants in Southeast Michigan, a personal friend of Bocelli’s, John was able to arrange the online exchange which will eventually be featured in its entirety in the series. We featured brief segments of the interview recently on my radio program Catholic Connection. It was so refreshing to chat with the Maestro and to learn that he is truly as kind and humble as he appears on stage and television. 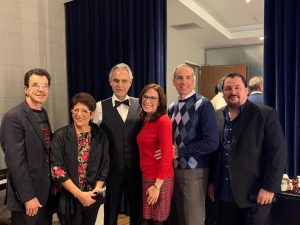 We also had the amazing experience to meet Andrea Bocelli and his family backstage before his concert in downtown Detroit, on December 5th. His wife and mother-in-law, and Bocelli himself, were beyond gracious. He couldn’t have been more down to earth and welcoming. That’s why the interview and our meeting are perfect items to share here as they were all so very inspiring. They certainly did not have to spend time with us, but they did – and very close to show time, I might add. They also thanked us for the interview and for promoting Bocelli’s incredible Believe World Tour which wraps up in Orlando on December 19th. How nice to know that there are still people in this world, despite their fame and fortune, that realize they are blessed and need to give back. And the Bocelli family does that by not only sharing his talents with the world, but by helping children in need through the Andrea Bocelli Foundation. 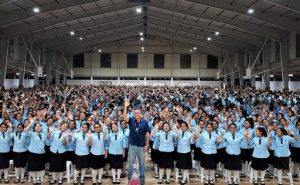 Someone else who truly inspires me; a man truly filled with the Christmas spirit of humility and giving, is fellow Catholic author and speaker, Kevin Wells. Kevin has been a frequent guest on my radio show. We initially met many years ago at a book signing during the March for Life in Washington. Kevin and I both have secular media backgrounds so we hit it off right away. Kevin is a former Major League Baseball sports writer for the Tampa Tribune but now focuses his efforts full time to promote heroic virtue in both the laity and the priesthood through his work as President of the Monsignor Thomas Wells Society for Vocations, which commits itself to the promotion of strong priests, seminarians, and practicing the fullness of the Catholic Faith. His book, The Priests We Need To Save The Church, published by Sophia Institute Press was a best-seller and has encouraged countless priests to look at their self-sacrificing work and virtues as priests. But Kevin hasn’t stopped there. He believes the best way to effect long term change in our Church is to help young people to be catechized in the Truths of the faith and live a life of heroic virtue as followers of Jesus Christ. Kevin is now working full time as a speaker to not only promote heroic virtues, but to bring awareness and help rescue children facing poverty, human trafficking, and dehumanization across the world through the amazing work of the World Villages ministry. 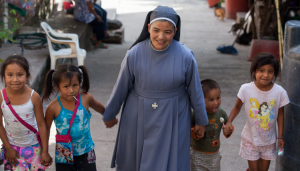