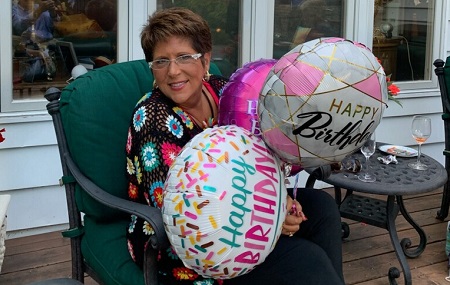 “I will not leave you orphans. I will come to you.”

Happy September! This week’s’ edition of T’s Teatime is going to be a little bit different. Normally this blog would be accompanied by a video. However, being that the topic I have chosen is built around a very emotional experience I just had on my birthday, I decided to nix the video. If the near blubbering that occurred while sharing the story on the radio recently is any indication, it would be doubtful I would be able to share it again without getting choked up several times on camera so the written word comes to the rescue.

This was the first birthday without my mom, Rosie. She died in March. Each year for as long as I can remember, when both Mom and Dad were still with us, they would call on my special day and sing to me. They both had beautiful voices and they had their own little birthday ballad routine. As soon as I would answer the phone, they would not even say hello, they would just start singing. It was precious. When Dad died in 2010, Mom did her best to keep up the tradition.

On my birthday this year, I was up a little earlier doing the Daily Mass Readings and thinking a lot about how much I would miss that phone call. In my prayers I thanked God for another birthday, for the gift of life, and I also thanked Him for my parents. Right after my radio program, I heard the phone ring. When I answered it, two of our dearest friends, Rick and Laurie, immediately began singing to me. Deacon Dom was standing close by when the call came in. He was taken aback as he could hear their lovely voices. It gave both of us the chills as it reminded us so much of the many wonderful birthday serenades I have been blessed with for so long. The serenade similarities were overwhelming, and I knew it was a Godly greeting, or a Godcidence, as I like to call them. Laurie and Rick had no idea of the tradition and agreed there are no coincidences. They just felt moved to call and sing to me, even though they already hosted a lovely birthday cocktail party at their beautiful home just a few days earlier, showering me with cards, flowers, and more. So, what prompted the phone call? And not just any phone call. It was a message communicated the same way my parents had communicated birthday cheer for decades bursting right into song together without saying hello, without barely taking a breath.

The call was prompted by the Holy Spirit. God knows what we need exactly when we need it. He promised us while He walked the earth that He would not leave us as orphans. Technically, in terms of my physical family, I am now orphaned. But we should also never forget that we are, even more importantly, God’s precious children.

“But to all who did receive him, who believed in his name, he gave the right to become children of God.” 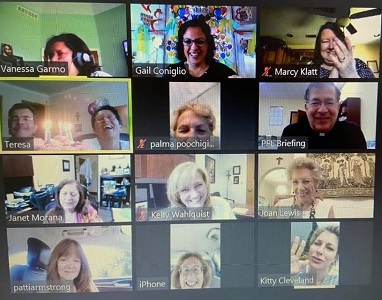 Later that afternoon, the Lord spoiled me yet again with another reminder that He is a good Dad in charge of an incredibly large and loving family. The wonderful staff of my company, Teresa Tomeo Communications, directed by the efforts of our fearless leader, Gail Coniglio, or as we call her “boss lady”, treated me to a surprise Zoom birthday party. I knew that our staff would be on the Zoom call. But had no idea that Gail had arranged for close to ten other dear friends from across the country, even around the world, to join in the online celebration, including EWTN’s Joan Lewis, all the way from the Eternal City. These are truly my sisters and brothers and they showered or serenaded me with more “Godly Greetings” than a girl could ask for.

Since T’s Teatime is about positivity; never letting circumstances steal your inner joy, I hope this Godcidence of mine will encourage you again, to be grateful, to look at the glass as definitely half full rather than half empty, and to never ever forget that our Heavenly Father, is not far away at all. Through the Holy Spirit working with the open hearts of our Christian siblings, He sings us a love song, not just on our birthdays, but every day as He continues to hold us right in the palm of His hand.

“For the Lord will not forsake his people, for his great name’s sake, because it has pleased the Lord to make you a people for himself.”

Consider taking sometime this week to uplift and encourage someone in your life that may need it. You never know what a tremendous positive impact you could have on their day and week!

If you have an inspiring story to share, please email me at inspiration@teresatomeo.com.