Italians mark the feast of St. Lawrence (San Lorenzo) as an important feast in Italy. St. Lawrence was a deacon and martyr whose feast is celebrated on August 10th. He’s a favorite among Italians, and is the patron saint of deacons, as well as the patron of cooks. The cooking connection is based on his form of martyrdom. He was roasted to death on a gridiron as shown below in this beautiful sculpture by Italian artist, Bernini. 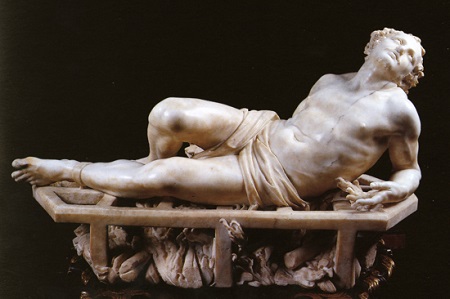 The Martyrdom of St. Lawrence/Gian Lorenzo Bernini, 1617, The Uffizi Gallery

Saint Lawrence was the ultimate optimist. He looked at his suffering as an offering, and a way to honor God. He embraced it and even make a joke to those who were burning him. This is why he is also known as the patron saint of comedians, based on his unbelievable sense of humor that he maintained even as he was being grilled to death, telling his torturers “turn me over and eat, as I’m done on this side.” This is why you will find that many Italians often have a statute of St. Lawrence or San Lorenzo in their kitchen.

I had read or heard most of these facts about this great saint before, but you learn something new every day. Apparently, he has a connection to “starry nights” and meteor showers which was indeed something entirely new to me. His feast day falls in early August, apparently a great time for star gazing. The Perseid meteor shower is also called the “Tears of St. Lawrence.” You can read more here about why the falling stars are referred to as the saints burning tears. This month the experts the best date to see the meteor shower is August 12th.  Happy star gazing.

During difficult times it is hard to be positive, but we can look to Saint Lawrence to do just that. I hope you enjoy this T’s Teatime video featuring one of my Catholic Connection listeners who was determined to do something positive for God and Country. She wanted to pray for the country and those needing healing (whether spiritual or physical healing) and encourage others to turn to God and do the same.

I encourage you to stay positive and if you want to share an inspiring story, please email me at inspiration@teresatomeo.com.

What the Lord Does With Our Little “Yes” from Teresa Tomeo on Vimeo.

If you have an inspiring story to share, please email me at inspiration@teresatomeo.com.

I invite you to visit my T’s Teatime Inspiration Page for more Teatime vlogs and other inspiring news and stories.