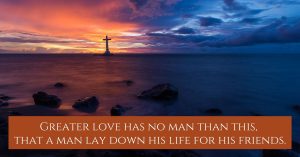 Looking at all of the stories where this person or that organization makes a very vocal public stance, files a lawsuit or does both, claiming they’re very offended by an action taken, often something said by a faithful Christian, I was brought back to a monument my husband and I stumbled upon when we were visiting his family in his hometown of Scranton, Pennsylvania.

It was during the very popular Italian American festival, which is held downtown during Labor Day weekend. We were strolling past all the wonderful vendor booths and decided to grab a gelato and sit down for a while. We meandered over to a small area in front of the local courthouse that had several park benches. As we were relaxing and enjoying our treats, we couldn’t help but notice a large monument nearby. It caught our attention not only because of its size but because of the word carved and emblazoned into the top of the structure and in large capital letters: “BROTHERHOOD,” as well as the quotes listed below it. The stone structure is part of a larger monument and area dedicated to Vietnam veterans.

There was a wonderful quote, for example, concerning humility from President Dwight D. Eisenhower: “Humility must be the portion of any man who achieves acclaim earned in the blood of his followers and the sacrifices of his friends.”

And there was some additional food for thought regarding putting others first despite the pain and suffering to one’s self, from author Horace H. Shaw: “The strongest ties between human beings are not cemented in safety luxury and comfort. It is in the dividing by a hungry soldier, with a hungrier comrade, the last morsel of meat, the binding up of each other’s wounds, the lending of courage from one heart to another.”

Although the words of Eisenhower and Shaw weren’t from Scripture, a Catholic saint or well known Christian leader, they had a very faith-filled tone to them. Afterall, Christianity, it’s often said, can be explained by using one very short and simple word, “joy,” as an acronym: Jesus first, Others second and Yourself last.

Given again the Christian tone in the other quotes, imagine our utter frustration and extreme disappointment when it came to the last quote on the monument. The source happened to be taken from the best-selling book of all time — yes, the Bible. However, while the verse mentioned is one of the most well-known and important verses of the New Testament, none other than John 15:13, it was cited as “anonymous.” “Great love has no man than this: to lay down his life for his friends.”

There it was and wasn’t. Who said that? We know it was none other than the Lord himself. But the only reference one walking by the monument would see wouldn’t be from the Gospel of John. They would only see the word “anonymous.”

Yes, “anonymous.” We kept saying it out loud and to ourselves repeatedly in disbelief. Did those who put up this monument not see the irony? They were apparently trying very hard to get across the message of self-sacrifice and selfless love of those who gave their lives in service to their country. How could the proper attribution to Jesus, the ultimate source of love and sacrifice as exemplified on the cross, be omitted or ignored?

My husband and I both decided that this was worth some follow-up. Continue Reading at Our Sunday Visitor.