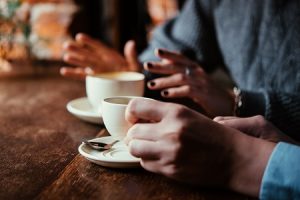 I don’t know about you, but more and more I’m hearing of cases from radio listeners, friends and co-workers who have been accused of being uncharitable, unloving, even judgmental by sharing the truths of the Catholic faith.

We’re all called to evangelize by virtue of our baptism. Now obviously, as badly as we want folks to embrace our faith to the fullest, we’re not going to win anyone over by hitting them over the head with the Catechism of the Catholic Church and the Bible.

My husband, who came back to the Church about a year or so before my journey home, admits openly when we give our testimony that he was way too heavy-handed at first. He was just so excited about what he was learning in his Bible study, as well as classes he was taking at Sacred Heart Major Seminary in our home archdiocese of Detroit, that he couldn’t wait to talk about his newfound faith and share with me the joy he was experiencing in his relationship with Christ. While he meant well, his overzealousness was a bit much, and he didn’t get very far. What eventually did win me over was the change I noticed in him and his willingness to love me enough to meet me where I was at.

That said, he didn’t leave me there. He prayed for me and gradually brought me to a place of deeper understanding. He answered my questions and gently showed me how we needed to be in a relationship of three in our marriage with God at the center.

With this personal experience in mind, one that eventually saved our struggling marriage and turned our lives around for the good, I’m sad to learn of so many recent instances where Catholics and other Christians get offended, even angry, when the truth is explained to them, no matter how kindly or softly.

One instance that comes to mind was an on-air interview on my radio program with a pediatrician who is considered an expert in the area of gender dysphoria. She was discussing the case of the 7-year-old boy in Texas who is at the center of legal battles between his divorced parents. The boy’s mother insists he wants to be a girl and is planning on putting him on puberty-blocking drugs and eventually to have him go through with the so-called reassignment surgery. The father strongly disagrees with the mother’s assessment and is promising to fight this all the way to the Supreme Court. During the interview, the doctor on my program was very gentle as she described how this case and others need to be approached. She said that parents need to be strong enough to realize that there is an extremely small percentage of children who struggle with actual gender dysphoria. Parents should not be afraid to seek help from those in medicine and psychiatry who haven’t bought into the current and pervasive transgender ideology. Apparently, her approach was too severe, as a caller complained that she didn’t hear enough “love” in the on-air discussion. In addition to not being loving, she also accused us of being judgmental.

Just as with other teachings of the Church that are considered hot-button issues in today’s P.C. crazed culture, to be truly loving and concerned about someone’s life and well-being is to share the truth of who they are and God’s ultimate plan for their lives. All we need to do is take a closer look at the source of all love: Jesus. While he certainly was gentle, loving and nonjudgmental in his encounters — such as with the woman caught in adultery and the woman at the well — he didn’t leave them where they were at… Continue Reading at Our Sunday Visitor.