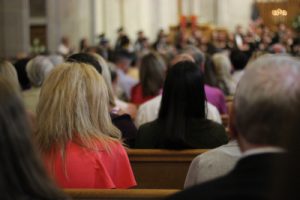 How can someone involved in ministry be so out of touch on such an important issue — an issue that impacts not only his parishioners but those connected to them, not to mention the rest of us? That was the question that crossed my mind as I was setting up my vendor table at a local Catholic conference in Michigan earlier this month.

The question followed a semi-private conversation I overheard between a deacon and another vendor. The deacon seemed very frustrated and appeared to be looking for some empathy based on the experience that he was having with his associate pastor. As I was setting out my books and fliers, I couldn’t help but overhear the deacon lamenting the fact that, much to his dismay, the priest recently had been preaching on the abortion issue — an issue the deacon thought had no place in a homily based on the average age of those in the pews and, in particular, the age of the women at his church.

“Most of the women in our parish are in their late 60s and 70s. Why would they care about these things? He should be talking about euthanasia and assisted suicide. Not abortion. This priest is so out of touch and won’t take any advice from me.”

The conversation ended quickly when the deacon realized the person whom he was trying to engage wasn’t responding the way he seemed to hope or expect. It was another obvious and very sad case of projection. After all, the person who is extremely out of touch is the deacon, not the priest.

Let’s begin by just looking at the numbers. Since 1973, it’s estimated there have been over 60 million abortions in this country. Apparently, this deacon has no idea about that alarming figure and how it translates to those Catholics to whom he is called to minister. The research also tells us that 1 in 4 women in the pews has had an abortion. We also know that many women from the baby boomer era are still carrying that cross. Even if they have received the Sacrament of Reconciliation, they feel that while God has forgiven them, they cannot forgive themselves. Women 50-70 years old are prime candidates for post-abortion syndrome. And that’s just the women who’ve had an abortion. More and more men are now coming forward expressing the impact of abortion in their lives. Whether they helped procure an abortion or tried to prevent their spouse, daughter or another loved one from going through with the procedure, they, too, are greatly and very negatively impacted. Continue Reading at Our Sunday Visitor.