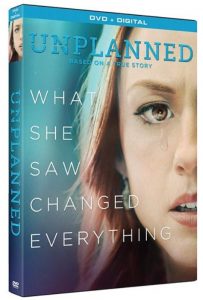 I am thrilled that the DVD for the movie Unplanned, about the conversion of Abby Johnson, a pro-choice Planned Parenthood clinic director to a pro-life powerhouse, has been released and already trending #1 at Amazon. The movie, showing what really happens in an abortion, can now be shown in homes, churches, colleges, and beyond. As successful as this movie has been, there has been a lot of push back from abortion supporters. First, the movie which has no violence and only one scene with any blood in it, was given an “R” Rating by the Motion Picture Association of America, when graphically violent movies routinely receive a PG-13 rating. That meant previews could not be shown before non-R rated movies without special permission, which was denied. All TV networks but one refused to run advertising for the movie, as did Twitter.

Twitter, in fact, briefly suspended the movie’s account on opening weekend, removed 85,000 of their followers, and then wouldn’t allow people to follow the movie’s page at all. Distribution companies in Canada refused to show it, effectively banning the movie in that country. And when independent theatres arranged showings there, their employees received death threats. The biggest music licensing companies refused to allow their popular music to be used in the film. Google not just refused to allow Unplanned advertising, but also labelled the movie “propaganda” in search results.
But now that the DVD has been released, the message of what really happens during an abortion and how it affects women – and clinic workers – can spread much farther. And you can be part of getting the pro-life message out. You can:

The more people that are exposed to the film the better. And perhaps the women who have had abortions will see that pro-life people really want to help them – and that they can be healed, made whole, and forgiven.

**To host a screening of the movie to a church or other group go to UnplannedScreenings.com.