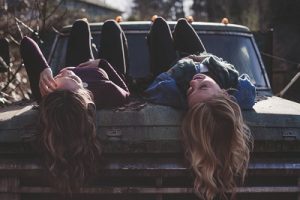 Just a few weekends ago, we celebrated Trinity Sunday. And while the Trinity is so mind-blowing that even some of the greatest theologians in Church history had, and still have, a hard time explaining and understanding it, we can, at the very least, grasp that it’s about relationship. We were made, first and foremost, for our relationship with God, and then with each other. So relationships involving family as well as friends really do matter. God doesn’t go it alone, so neither can we. God in the three Persons of the Holy Trinity shows us from the get-go that we need loving, giving relationships to grow and thrive. Research again and again backs this up, showing how it impacts key areas of our lives.

Some examples of this evidence were cited in a Southern Living Magazine article on friendship. The story, Why Spending Time with Friends Can Be Good for Your Health, says, among other things, that whether they come from friends, family or a spouse, those connections can improve mood, lower stress levels and encourage positive behaviors. On the other hand, social isolation can lead to increased rates of mental health issues and chronic illness, with the detrimental effects of loneliness being as bad as smoking 15 cigarettes a day. Given all the technology available — technology supposedly designed to help us stay connected and build on those relationships — one would think that we would have wiped out loneliness and isolation by now and that relationships in general would be in better shape. Unfortunately, studies show just the opposite is happening. Social media apparently is being used so much that it is infringing on real face-time and face-to-face quality time.

Among the experts quoted in the Southern Living piece was Dr. Stuart Lustig, who conducted a study on behalf of the health insurer Cigna. Lustig went so far as to say social media should be used “judiciously” and “strategically.” When’s the last time you heard or read those words mentioned in the same sentence when discussing social media usage? And when it comes to the connection between loneliness and social media, a vast majority of the research has been dedicated to looking at the impact on the lives of teens. Recently, a major report released in March says that teens whose face-to-face time with friends is only through their phones… Continue Reading at OSV Newsweekly.