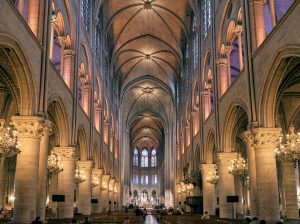 How many times have we been challenged over the years by someone who has left the Church or harbors disdain and distrust for anything Catholic? A common misconception such folks are quick to express is that the Church simply must sell all the religious art at the Vatican and other major basilicas around the planet to help the poor. What’s the purpose, they’ll argue, for all the grandeur? Does the world really need so many ornate structures, sculptures and paintings? If the Church were really concerned about our troubled world, then surely this type of effort would go a long way in sending a Christian message of charity and more importantly, they’ll claim, to make a real difference.

They forget, refuse to acknowledge, or are unaware of all the good the Church does through various Catholic organizations, religious orders, missions, and volunteer agencies, working diligently and quietly in every corner of the earth to address many crucial humanitarian needs. They also have yet to understand, whether consciously or subconsciously, how beauty in its many forms touches the soul and reveals the glory of God.

I thought about and prayed for the many cynics and Catholic critics as I was glued to the news coverage of the devastating fire at the famous Notre Dame cathedral in Paris during Holy Week. In addition to the heroic efforts of the fire chaplain and others who risked safety to save precious relics, as well as the people on the street praying the Hail Mary or spontaneously singing Ave Maria, I was moved by the comments from the average folks about what Notre Dame meant to them. As I listened and watched, I asked God to touch the hearts of those who often look down on the Church, praying again that these folks were watching, listening and perhaps even giving their attitudes a second thought.

A statement from an American woman living in the City of Lights was particularly powerful. She called in on her cell phone to share her feelings, choking back the tears as she was telling the news anchor on live network television that visiting the cathedral has caused her to think about becoming Catholic. She explained that, although she never considered herself to be all that religious, her many visits to Notre Dame made it impossible for her not to be transcended and to wonder how such a place could be built with human hands — whether it was architectural design, the religious scenes so meticulously depicted in the famous rose-colored stained-glass windows, or the sheer size of the massive bell towers. The magnificence of the cathedral was just so overwhelming that she was eager to acknowledge very publicly that it brought her to another place. Continue Reading at OSV Newsweekly.