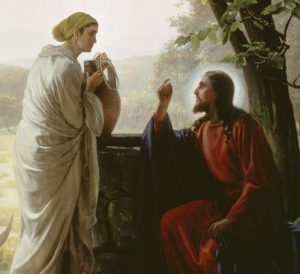 A few years ago, I was speaking at a women’s conference and a priest preached about the story of the Samaritan woman. Perhaps you have heard this story many times before, or maybe you’re not very familiar with it. Either way, I encourage you open your Bible now to John 4:1–42, and take the time to read this passage slowly.

The priest talked about the three-pronged approach all of us need to take when it comes to our relationship with God. I like to refer to this approach as the “three M’s of faith”: Meeting, Mercy, and Mission.

When we encounter or meet God, if we are truly open as the Samaritan woman was, Jesus shows us how much he loves us by showing us mercy. It’s not about condemnation. It’s about love and reconciliation. Once we receive that love and mercy, we are grateful for the opportunity to begin again, and we set out on a new mission of faith.

The Samaritan woman was an outcast because she was living with a man who was not her husband. She also had had five husbands in her past. In order to avoid the snubs and glares from the townspeople, she would go to the well to fetch water at about noon. In that part of the world, noon is the hottest part of the day, and most people do not go outside at that time, if they can avoid it. This meant that she would, for the most part, be alone. She could get her water and head back home, hopefully without being noticed. Except this time, when she arrived at the well, someone was waiting for her. And that someone just happened to be God himself.

Her meeting, or initial encounter, with Christ, was the beginning of a new life for this woman. Jesus told her about her own life and how she was selling herself short. He didn’t condemn her. Instead, he showed her how her daily trips to the well weren’t ever going to satisfy her. She would be forever going back to that same well without her thirst being quenched. “Every one who drinks of this water will thirst again,” he told her.

Isn’t that sense of being constantly thirsty for something, even if we don’t know what it is, a feeling we all know too well? How many times have we accomplished a goal or obtained something that we thought would definitely make a major difference in our level of happiness, only to feel empty or parched a short time later? Then we start searching for something else, and the cycle begins all over again. Maybe we feel ashamed because of the things we did to get what we thought we wanted.

I can relate, believe me. For years, I bought into the lie that the way to true happiness was self-fulfillment. No matter how well I did in my work, or how many awards I won, there was always something missing and I felt empty.

Like the Samaritan woman, we might hide from God or others for fear of condemnation and rejection. But those feelings of emptiness or shame brings an awareness that recognizes an imbalance in our life that needs correcting. God doesn’t want us to hide from him and stay stuck in our shame. When Christ meets us, he shows us — as he showed the woman at the well — nothing but mercy. 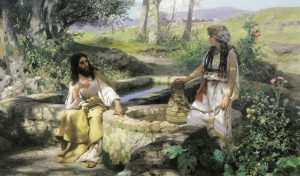 Let’s think about this for a minute, looking at the Gospel story. There was the initial encounter with Christ at the well. He entered into a real conversation with the woman. His gentle approach enabled her to open up and admit the truth to Jesus. He, unlike other people in her town and in her life, did not condemn her, in spite of everything she had done. Because of his genuine interest and concern, she was able to move past her shame and receive his gift of mercy. She felt like a new person, inside and out, because she met the Messiah, and the Messiah cared deeply about her. She was so moved by the experience that, as Saint John’s Gospel tells us, she forgot all about the task at hand that day (fetching water). Now, all of a sudden, she had much more important work to do. She had a mission.

We won’t meet Jesus in person, as the woman at the well did, but we can meet him in another place that allows us to receive his gift of Mercy: the Sacrament of Penance and Reconciliation. After humbling myself and going to Confession, Jesus showed up, big time, and gave me abundant mercy and a brand-new mission. And he can do the same for you. Mercy is never far away. It’s right down the block or around the corner at your local parish, and it starts with Confession.

The Samaritan woman’s meeting with Christ didn’t just end with his mercy, it gave her a mission that was a new lease on life. She responded to God’s call to spread his word to her community. She was no longer ashamed, and was forgiven and ready to face those who just a short time before were people she avoided over embarrassment. And her mission allowed them to also encounter Christ and change their lives.

Mission sounds scary doesn’t it? When we hear or read about a mission, we might automatically think about missionaries in faraway places, such as the incredible missionary work of Saint Teresa of Calcutta. But few are Mother Teresa. Most of us are called to be missionaries right where we are. Even Mother Teresa said pretty much the same thing, “If you can’t feed a hundred people, then just feed one.”

We can start to learn our mission through prayer and listening to the Holy Spirit, while living our lives right now. In other words, your “mission” right now could be as simple as re-ordering some priorities and being the very best spouse and parent you can be. It could mean starting a Bible study at your parish or using your skills to help a particular ministry or charity, but we need to listen and be open to God’s will wherever he leads us. He will never force us to do what he wants. He has given us free will but we do have to have an open heart exercising our free will with a “Yes, Lord.”

Responding to the Lord’s call starts with a meeting. In that meeting, if we are willing to take that first step, God gives us mercy. When we receive his mercy, everything changes. We’re so grateful that we just can’t keep it to ourselves, and we begin a brand-new mission. Maybe your ministry won’t be a public mission or evangelization. Every person’s mission is unique. But wherever God calls you, you can count on this: things will change for the better. God keeps his promises.

Note: This is an adapted excerpt from Teresa Tomeo’s book “Beyond Sunday: Becoming a 24/7 Catholic” published by Our Sunday Visitor.