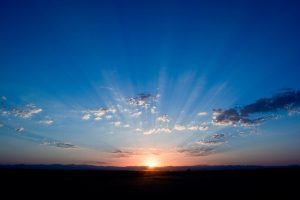 I’m not sure where I first heard the suggestion that Christians need to think about the word “joy” as an acronym: Jesus first, others second, yourself last. This explanation hit so close to home that, to this day, the catchy phrase continues to keep me focused on what really matters.

I often find myself referring to it on my radio program when trying to explain some aspect of Church teaching. In speaking engagements when sharing my journey back to the Catholic Church, it really helps me explain how my own selfishness and the pressures from the “it’s all about me” culture not only nearly cost me my marriage but also my soul. I certainly didn’t put Jesus first, others second and myself last. It was just the opposite, with success and money coming before everything and everyone else. And Jesus, quite frankly, was nowhere to be found.

There is also more and more evidence to back up the claim that putting God and others first does lead to a happier and more joyful life. Plenty of studies show that going beyond one’s self leads to a feeling of purpose and, yes, to being even healthier physically and psychologically, because getting out of one’s comfort zone and attending to someone else’s concerns or problems keeps us moving and thinking. But it’s much more than that.

One recent study of religious people around the world goes so far as to say that being faithful leads to a happier, more joyful life and helps keep people involved in making a difference for those around them. In other words, faithful folks make the world a better place, despite what the religious naysayers claim.

The Pew Research Center recently conducted surveys in nearly 26 counties to learn more about the connection between measuring happiness, health and civic engagement in correlation to their religious activity.

“People who are active in religious congregations tend to be happier and more civically engaged than either religiously unaffiliated adults or inactive members of religious groups,” the research found.

Reading this report is seeing the truth of the Gospels being applied to the everyday lives of people around the globe. There really is something to the Lord’s constant reminders to feed the hungry and clothe the naked. We really do feel better and make the world better when we defend those who can’t speak for themselves, as Proverbs 31:8 reminds us. Who knew?

The report goes on to state… Continue Reading at OSV Newsweekly.