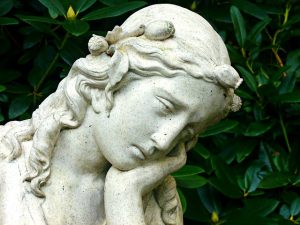 “Fasten your seat belts. It’s going to be a bumpy night.” That famous line from Bette Davis’ feisty character in the classic 1950 film “All About Eve” can certainly be applied to what we’ve experienced and continue to experience in the Catholic Church. We’ve had plenty of rough and bumpy times connected to the abuse crisis — so troubling that it’s causing many Catholics to have extreme reactions that aren’t helping matters, to say the least.

Certainly, it’s natural to have moments of heartache or despair. Given the headlines over the last several months, who doesn’t, on occasion, want to just head for the hills? But those feelings of frustration or disgust should not be allowed to consume us to the point where we find ourselves swinging from one end of the emotional pendulum to the other, allowing our feelings to take over and rendering us pretty much helpless, hopeless or even reckless in our approach to the ongoing crisis.

Unfortunately, far too many Catholics I’ve come in contact with are exhibiting these types of behaviors. On the one hand there are those who are spending so much of their time on websites full of all gloom and doom that they’ve become convinced there are no longer any good religious left in the Church or that there is a conspiracy and a cover-up in virtually every Catholic corner. They have lost complete trust in the hierarchy and as a result, as Msgr. Charles Pope commented in a recent blog for the Archdiocese of Washington D.C. (“Can Anything Good Come Out of 2018?”), they’re part of a laity “that is so bold as to be incorrigible, unteachable and disrespectful of clergy and bishops.” It’s their way or the highway, so to speak.

There are other extremes as well. One where folks say, “God’s got this.” They have convinced themselves that this approach shows ultimate trust. Any efforts to speak up for victims, or respectfully write or reach out to those in Church authority, are viewed as disrespectful and not having a strong enough faith. But Christians are never called to sit by and do nothing simply because we trust God can handle it.

And yet one more extreme response is the “if they don’t care, we shouldn’t care” approach. One blatant example of this came from a recent listener of mine… Continue reading at OSV Newsweekly.