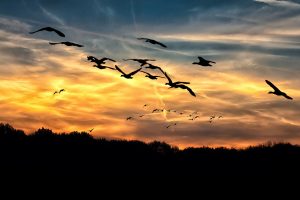 It was a tough year, and there is no indication that we’re going to have it any easier in 2019. In just a matter of weeks, the abuse crisis in the Church will be as front and center as it was last June when the initial stories about former Cardinal Theodore McCarrick made headlines for his past sexually predatory behavior. Bishops from the United States and all around the world will be gathering in Rome in late February with Pope Francis to address the global crisis.

Given all the disappointments we have had in recent months related to the handling of the crisis, one can hardly expect the laity to hold out much hope for the gathering in the Eternal City. But we can continue to focus our hope and trust in the Lord who reminds us, even in the midst of darkness, that he is with us.

Some call them “God winks” or “God moments.” I refer to them as “Godcidences” since as Christians we know and believe that there is really no such thing as a coincidence — God’s hand is in everything. I have had quite a few of these profound experiences where God makes his presence known in some unusual and quite obvious ways. These experiences immediately lift my spirits, affirm my faith and allow me to, in my own way, keep fighting the good fight.

Another one of these “Godcidences” occurred shortly before Christmas. I was sitting in my car about to head home after our annual Christmas luncheon at Ave Maria Radio. As I was getting ready to leave, I heard one of my favorite songs on the radio. It’s not really a Christmas carol per se, but it has become a very popular tune around the holidays. It’s one of the numbers featured in the timeless and much-loved film, “The Sound of Music” starring Julie Andrews and Christopher Plummer. “The Sound of Music” is right up there with “A Miracle on 34th Street” and “It’s a Wonderful Life” in terms of what are considered Christmas classics, and it’s usually aired on one or more TV channels during the Christmas season. It just so happened — again no coincidence — that earlier that same morning I had featured an interview on my radio program about the re-release of Maria Von Trapp’s book, “Around the Year with the Von Trapp Family” (Sophia Institute Press) so of course we used music from the movie as part of the interview.

To my surprise, this particular number, “My Favorite Things,” just happened to be the song playing on satellite radio when I started my car. And just as Maria instructed the children to think about their favorite things in order to make them feel better, I did the same.

In my mind and heart, I offered up everything that was troubling me at the moment, including the many ongoing issues in the Church that were taking up so much of my time and program coverage, and instead I thought about… Continue Reading at OSV Newsweekly.