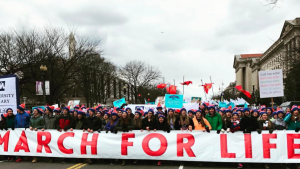 Something odd happened on the way to the 44th annual March for Life in Washington, D.C.  It’s something that, for the most part, has never happened in all the years the hundreds of thousands of dedicated pro-lifers have been gathering to speak up against the infamous Roe vs. Wade decision that legalized abortion through nine months of pregnancy.

That strange occurrence can be summed up in three words: increased, serious, and substantial secular media coverage.

I have been privileged to be part of the live television coverage for the EWTN global network for several years now.  However, outside of Catholic media and some conservative outlets, most of the secular networks and journalists have acted as if we don’t exist. The coverage has been miniscule at best, with barely a few blips on the news radar screen.  As a matter of fact, the media watchdog group Media Research Center recently reported that the major broadcast networks (ABC, NBC, and CBS) gave some 4,518 seconds of news coverage to the January 21st, “Women’s March” in D.C. and a mere 35 seconds—yes, you’re reading correctly, only 35 seconds of news coverage—to the 2016 international March for Life.

But a few days before this year’s pro-life march there was a change… Continue Reading at Catholic World Report.