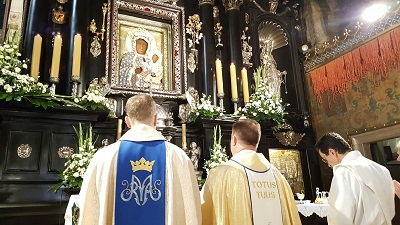 As my husband and I were traveling to Poland just a few days ago to begin our journey in the footsteps of some of the country’s greatest saints, we were coming off of yet another troubling week of news coverage of the presidential election. There were also a number of stories on the continued push of the transgender agenda. Everywhere, or so it seems, there were additional attacks on family values and especially the teachings of the Catholic Church. Reminding us once again that religious freedoms and freedom of speech are slowly being wiped out before our very eyes. I couldn’t wait to get on the plane and leave it all behind. Quite frankly, I was tired of hearing all the bad news, and tired of having to address the topics on my radio show. I needed a break.

I don’t know what I was thinking because as is often the case, especially on pilgrimage and in our lives in general, God has, and had, other plans. Our pilgrimage journey began on Sunday with Mass at the Church of St. Stanislaw Koska in Warsaw; home of the tomb and museum of martyr, and now blessed, Fr. Jerzy Popielusko. Right away we were hit smack between the eyes with the reality of religious persecution. Fr. Popielusko spoke out against the communist government and paid the ultimate price. He was abducted, murdered, and his body thrown into the river. Hundreds of thousands attended his Masses and the government considered him a threat. We were blessed to have Mass not far from his tomb located just outside the church. And then there were the Mass Readings. First, we heard about the prophet Jeremiah being rejected by the people and being thrown into a cistern. The Second Reading was from Hebrews reminding us of the “great cloud of witnesses,” and the encouragement to “run the race that lies before us while keeping our eyes fixed on Jesus; the author and finisher of our faith.” But wait, God wasn’t through yet. The Gospel of Luke this past Sunday, if you recall, had Jesus encouraging all of us that He had “come to set the world on fire” and how He “wished it were already burning.”

So, there I was, trying to run away from the pressures of the world, and here I am now, along with my husband Deacon Dominick and 69 other pilgrims from across the country, learning about some of the greatest and most recent saints who were so willing to set the world on fire no matter what it cost. Even though I lead pilgrimages quite often, this time around I was looking at this time as more of a vacation. But again God had other plans. The journey continues as we head to southern Poland to learn more about these great witnesses. Pray for those of us on this special journey as we are praying for you. Let’s pray that all of us will be able to face the battles ahead as they did; with courage, conviction, and joy. Our Lady of Częstochowa, Blessed Jerzy Popieluszko, St. Faustina, Pope St John Paul II, St. Teresa Benedicta, and St. Maximillian Kolbe pray for us.