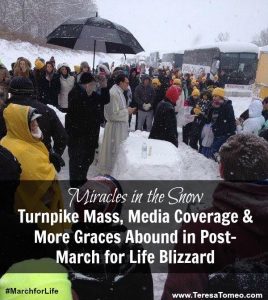 “All things work together for good for those who love the Lord and are called according to His purpose.”

The East Coast is still digging out from a blizzard that was of historic proportions. And that’s putting it mildly according to the weather gurus and those of us, including yours truly, who were in the middle of it all when Winter Storm Jonas decided to make a name for himself in Washington, New York, the Jersey shore, parts of Pennsylvania, and plenty of other places in between. This epic Nor’easter dumped several feet of snow and clobbered major cities, shut down airports big and small, closed government offices, and forced everything but emergency vehicles off the roads. Forty eight people have died. The entire world, or so it seemed, came to a screeching halt – except the pro-lifers at the March for Life and the Catholic Church.

The snow began to fly in Washington at 1:00 pm on Friday, January 22nd — the exact time the March for Life began. Coincidence? I think not. Planned Parenthood has been under the legal and public microscope more than ever before and it’s an election year. Just two key reasons as to why the prince of darkness was surely hoping that old man winter would bury not only the marchers, but their message. The marchers did not allow it however, and the light of Christ shined for all to see!

There is an old saying that the devil always strikes first but God has the last word, and so it was with the March for Life 2016. The March went on with close to 100,000 faithful pro-life warriors in attendance. Much smaller yes from previous years, but still how remarkable is it that 100,000 people showed up for an event in the middle of the biggest storm to hit the nation’s capital in a century? And thanks to the storm, the message of God’s mercy and the beauty of our Catholic faith was seen, heard, and experienced in ways we could have never imagined. We’re so used to the media ignoring the March that we never could have dreamed that a snow storm would lead to priests and Catholic students being interviewed by the likes of CNN, ABC, Fox, along with several local TV stations and newspapers, and those are just the standard news outlets. That list doesn’t even begin to cover the stories that caught the social media buzz and went viral over the past few days.

Of course, front and center of it all was Jesus in the Eucharist and the Mass. A bad accident on a stretch of the Pennsylvania turnpike led to a 32 mile back up of stranded vehicles. Among the stranded, were hundreds of Catholics, including students, their parents, and a number of religious, trying to make it home from the March. The “Turnpike Mass” as it is now being called, complete with the altar made of frozen snow, has reminded the world about the beauty of the universal Church.

As if that weren’t enough, the kindness and mercy shown by the young people and others was a true witness to what it means to be Catholic, especially in this Year of Mercy. They shared their snacks. They helped dig out individual vehicles buried in mounds of snow on the highway. They brought many people into the buses to keep warm. Meanwhile back at the ranch, or shall I say hotels, where other stranded pro-lifers were located, unexpected but divine meetings took place that never would have occurred without the storm of the century. The most memorable for me was an impromptu conference that was put on by women of the Silent No More Awareness Campaign who shared their post abortion stories with dozens of high school students who most likely never would have heard those stories otherwise.

Over the next few days and weeks we will hear about more examples of what I like to call “miracles in the snow.” Many photos and videos have been posted. Share them. Reflect upon them. Thank God for them; and never forget that our Lord is indeed always with us — even quite literally — in the middle of the storm.