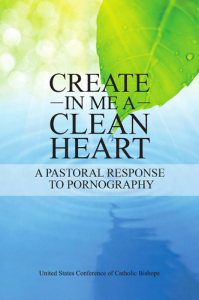 There is a saying that timing is everything. And in Christian circles, there is another saying that God’s timing is always perfect.

The bishops’ pastoral letter, “Create in Me a Clean Heart: A Pastoral Response to Pornography,” was released at the annual USCCB fall gathering last November. The document gives a sobering assessment of the problem, offering local parishes and dioceses ways to address the issue and also putting in writing the concerns many priests and pastors have been expressing for years: that the sin of pornography is among the most common heard during the Sacrament of Reconciliation.

The document states: “In the confessional and in our daily ministry and work with families, we have seen the corrosive damage caused by pornography — children whose innocence is stolen; men and women who feel great guilt and shame for viewing pornography occasionally or habitually; spouses who feel betrayed and traumatized; and men, women and children exploited by the pornography industry. While the production and use of pornography has always been a problem, in recent years its impact has grown exponentially, in large part due to the Internet and mobile technology. Some have even described it as a public health crisis. Everyone, in some way, is affected by increased pornography use in society. We all suffer negative consequences from its distorted view of the human person and sexuality.”

Then, on Dec. 29, a study involving seven countries was released showing that those who view pornography are much more likely to rape and use sexual harassment and intimidation to obtain sex. The report was published in the Journal of Communication. It involved researchers from the University of Hawaii-Manoa and Indiana University performing a meta-analysis of 22 different studies. “Consumption of pornography was associated with an increased likelihood of committing actual acts of sexual aggression,” the report stated. Dawn Hawkins, executive director at the National Center on Sexual Exploitation, said in a statement that she is hoping the latest report will result in a greater awareness not only of the dangers of porn use in general but the increasing connections to other dangerous behaviors. “Regularly or intentionally consuming any substance so strongly linked to increases in sexual aggression is not only harmful to the individual user but also poses the serious risk of violence and abuse to those in intimate relationships with them. From seat belts to drunk driving laws, our society works to reduce the harmful impact of risky behaviors, but when it comes to pornography, many people refuse to look at the facts.”

The facts, however, just won’t go away. The statistics on the devastating effects of pornography just keep piling up. We have the research. We have a fresh action plan from our bishops and activist organizations. The question now is: What are we going to do about it?

Allow me one more cliche, concerning the topic of timing. There is no time like the present, especially in this beautiful Year of Mercy, to speak up and let our brothers and sisters know that when it comes to the pornography plague, there is hope, healing and help available.